From caribou in the arctic tundra, to monkeys in the tropical rainforest, animals play a large and often unrecognized role in the carbon cycle.  In a recent paper, GEODE lead Scott Goetz and NAU colleague Chris Doughty review existing research on these “zoogeochemical” effects and how they impact landscapes.  Recent advancements in spatial ecosystem ecology, remote sensing and geospatial statistical are providing the tools needed to finally understand animal impacts at a regional scale, and include these impacts in models of carbon cycling and climate change.  Some of this work is underway right now in the GEODE and Doughty Labs.

Read more about this research in the Arizona Daily Sun and NAU’s The LumberJack.

Nadine Laporte, research professor in the School of Forestry, and Scott Goetz, professor in the School of Informatics, Computing, and Cyber Systems, are co-authors of a paper published in Nature Sustainability. “Road expansion and persistence in forests of the Congo Basin” studies the progressive expansion of logging roads across the Congo Basin. By comparing older and newer roads of different types, whether primary, secondary or logging roads derived from Landsat image time series data, the scientists show why the dramatic expansion is causing broad concern for forest ecosystems, carbon storage and wildlife vulnerable to subsistence hunting—and how decommissioning roads after logging could play a crucial role in reducing the negative impacts of timber extraction on tropical forest ecosystems.

School of Informatics, Computing, and Cyber Systems professor Scott Goetz is co-author of a study published July 3 in Science Advances. “Global restoration opportunities in tropical rainforest landscapes” identifies “restoration hotspots”—100 million hectares of lost lowland tropical rainforests in 15 countries across four continents—that could be restored now to boost the environment, biodiversity and climate change mitigation. “Tropical forest restoration and conservation go hand in hand,” Goetz said, “and there is much international political motivation to restore and conserve forests, so we need to collectively take advantage of this opportunity as soon as possible.” 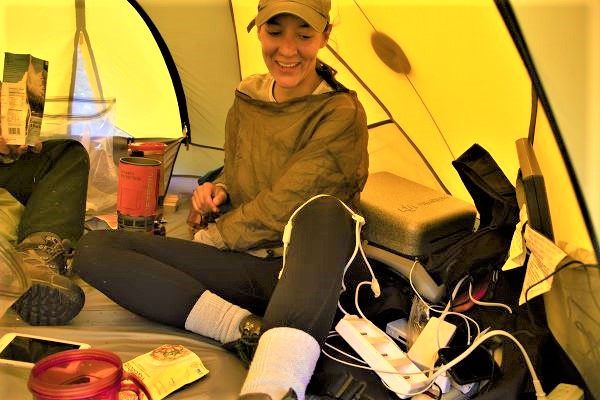 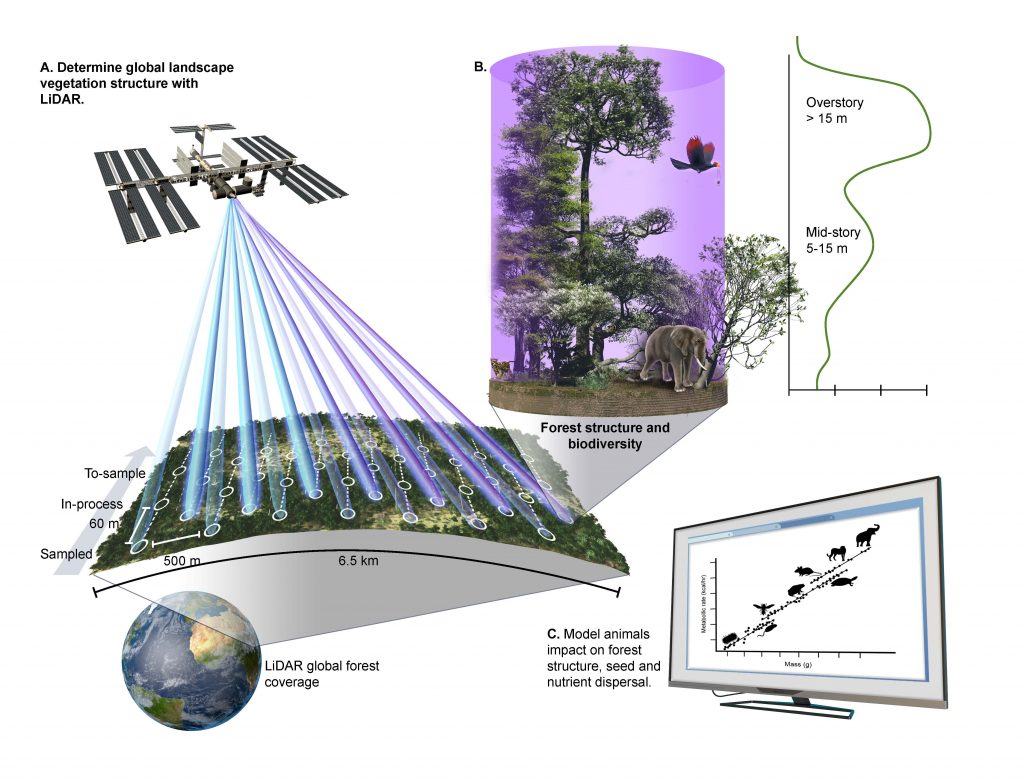 Over 300 folks tuned in to learn about applications of GEDI Lidar for biodiversity and conservation.  This webinar was hosted by GEODE lab members Scott Goetz, Patrick Burns, and Patrick Jantz.  If you missed it, you can watch a recording of the webinar here! 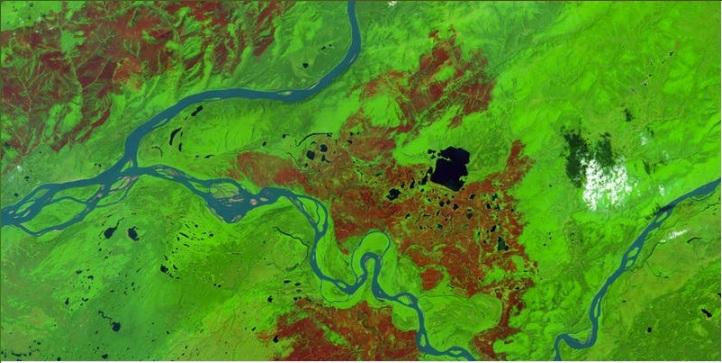 The slides from this webinar can be viewed here.

The 5th meeting of the ABoVE Science Team was held in San Diego, CA from May 20th-23rd 2019. There were over 125 attendees from NASA and other US federal agencies, Alaska, and a variety of Canadian federal agencies and tribal organizations. There were also many people from US, Canadian, and European universities. The goal was to collectively assess the latest in ABoVE science via a series of invited plenary talks, partner presentations, posters sessions, and lively breakout discussions. Invitational travel helped a number of students, postdoctoral researchers and collaborators attend. Many of the 84 poster presentations were led by students and postdocs, and the afternoon poster sessions provided vibrant and productive interactions among meeting participants.

Results from the 66 NASA-funded projects as well as 21 affiliated projects were discussed via the invited plenary and partner presentations as well as during the poster sessions. In addition, the 19 ABoVE Phase-2 PIs gave speed talks and posters on their newly funded projects. The plenary presentations were all excellent, nicely placing ABoVE research in a broader context. These included talks on Arctic vegetation dynamics, gaps in our understanding of the role snow plays in Arctic and boreal ecosystems, fire disturbance and legacy carbon, Indigenous perspectives and co-production of knowledge, and integrated ecosystem modeling, among others. Partner presentations nicely complemented the plenaries and breakout session discussions of synthesis activities by providing overviews of existing and potential synergies with large research programs like NGEE-Arctic, POLAR Canada, Global Water Futures, and the Canadian Forest Service. All presentations, including breakout session reports, can be downloaded from the online meeting agenda (no login required).

One key highlight was a plenary presentation on Indigenous Perspectives and Co-production of Knowledge by Mandy Bayha and Joanne Speakman, students indigenous to the Sahtu Region of the Northwest Territories. Their presentation nicely articulated the importance of combining traditional knowledge and western science to tackle climate change issues, especially in the rapidly changing Arctic where indigenous residents are already experiencing drastic ecosystem changes that threaten their livelihoods. Joanne and Mandy also gave a scintillating recount of their experience flying in a NASA G-III aircraft during a UAVSAR collect and an associated field data collection excursion in the 2018 field season. Read an associated story here.

The scientific presentations highlighted many of the high impact research results coming out of Phase-I ABoVE projects. For example, a presentation on the seasonal atmospheric CO2 amplification demonstrated that Siberian ecosystems are the dominant contributor to the amplification of the annual cycle of atmospheric CO2. Temperate ecosystems are the second most important contributor, while boreal and Arctic ecosystems in North America have not contributed substantially to the increasing CO2 amplitude. These results are consistent with differential ground- and satellite-based trends in greening and browning between Siberia and Arctic-Boreal North America. Indeed, another presentation explored the drivers of greening and browning (as measured via Landsat NDVI time-series) in interior Alaska demonstrated that forest composition and structure have strong impacts on NDVI trends, concluding that browning and greening forest patches occur naturally across the boreal landscape and do not necessarily reflect large-scale changes in boreal ecology.

There was a productive breakout session presenting and finalizing airborne data collection plans for the 2019 field season which will include AVIRIS-NG, UAVSAR, and LIVIS acquisitions. It is also clear that airborne data collected during the previous field seasons continue to pay huge dividends. For example, L-band data from UAVSAR and P-band data from AirMOSS have led to significant improvements in our ability to remotely quantify active layer thickness (ALT). These SAR based approaches for assessing ALT will continue to mature through on-going ABoVE research, ultimately paving the way for large scale assessments of ALT via data from the forthcoming NISAR mission. In addition, data acquired by the next generation Airborne Visible Infrared Imaging Spectrometer (AVIRIS-NG) is being successfully used to detect areas of CH4 enhancement associated with thermokarst and other permafrost disturbance within the ABoVE domain. These results will help constrain uncertainties in the current Arctic-boreal CH4 budget and the amount of future CH4 emissions in the permafrost carbon feedback.

Indeed, it was clear that ABoVE continues to be innovative, productive and impactful, with >135 publications, with several in top tier journals such as Nature, Science, and PNAS. ABoVE also continues to broaden its impact via increased sharing of datasets through the ORNL DAAC. Currently there are 80 ABoVE data products stored at the ORNL DAAC with 2,700 unique users of ABoVE datasets. The ORNL DACC also presented three awards to ABoVE scientists including Logan Berner who received the ‘DACC Staff Favorite’ award, Mark Carroll who received the ‘Outstanding Representation in the Literature’ award, and Tatiana Loboda who received the ‘Most Data’ award.

Finally, we sincerely thank all of those who participated in the meeting, and especially the members of the organizing committee whose efforts led to an extremely productive and rewarding meeting. We very much look forward to seeing all of you in Fairbanks, AK the week of May 11th 2020 for the 6th ABoVE Science Team Meeting! 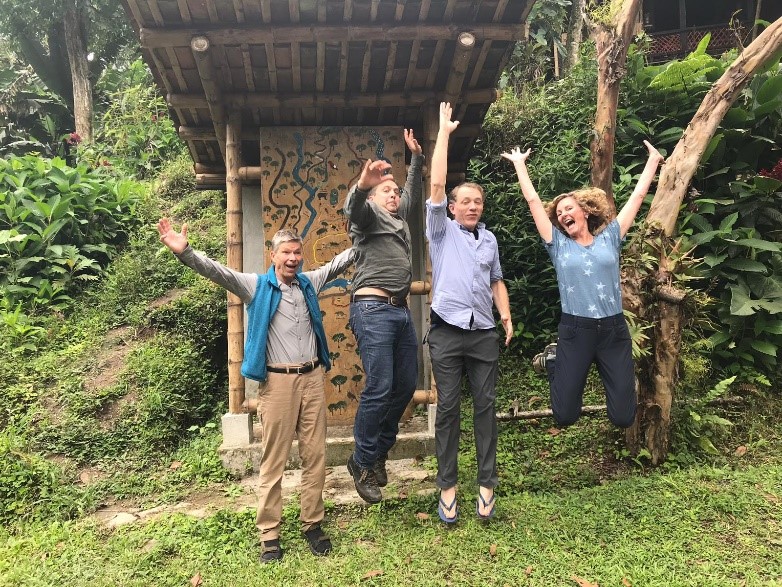 Patrick Jantz represented the GEODE lab in Ecuador 24-27 April, 2019 for a kickoff-meeting of the NASA-funded Project “Maintaining Life on Land (SDG15) under Scenarios of Land Use and Climate Change in Colombia, Ecuador, and Peru”. The meeting was held at the Maquipucuna Reserve in the Andean cloud forests ~2 hours from Quito, within the Chocó Andino de Pichincha Biosphere Reserve.

Over the course of two days, the group developed a scope of research and a project workplan aimed at supporting the Sustainable Development Goal reporting needs of the partner countries. In between work sessions, there were hikes through second growth forest and delicious food accompanied by the ubiquitous ají de tomate de árbol, a spicy sauce made from tamarillos. Patrick, Scott, and a Ph.D. student will work to develop forecasts of risk to water resources designed to inform planning and policy in the three countries.

Arctic Boreal Vulnerability Experiment (ABoVE) scientists will gather May 20-23, 2019 in La Jolla, California for the annual ABoVE science team meeting.

Plenary and poster sessions will report on Phase 1 progress and Phase 2 projects will be introduced.

An agenda and more details are available here.

NASA has selected professor Scott Goetz of the School of Informatics, Computing, and Cyber Systems (and GEODE lab lead) to continue in his role as science team lead for the ABoVE (Arctic-Boreal Vulnerability Experiment) project for at least five more years. In this role, Goetz leads 680 science team members representing institutions from the U.S., Canada, Austria, Germany, The Netherlands and the UK who are involved in more than 100 projects studying the vulnerability and resilience of ecosystems and society to the changing environment.